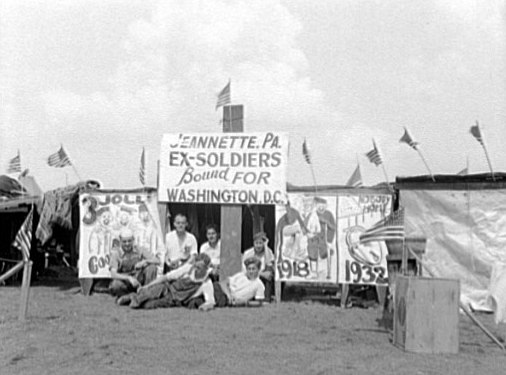 In Memory of Lost Unity

Veterans have always had Americans who worked against veterans. But the most damage to veterans has been caused by veterans.

Just after WW2 the most active group opposing veterans were American men who were excluded from military service for physical or psychological reasons. Not so much out of jealousy, but because of economic competition, disqualified non-vets were angry that war vets received employment incentives and benefits. But as the wartime economy was rapidly replaced by a civilian economy with America back to work making refrigerators instead of tanks, non-vet opposition to WW2 vets declined. Hollywood was of great help in making Americans welcome WW2 vets back into normal life both by hiring vets in acting roles and producing "coming home" movies.

But the Korean War changed things... during and after the Korea War the greatest enemy of Korea vets were WW2 vets who adamantly opposed sharing any wartime glory or benefit to those who served in Korea. Korea vets quickly became known as "the forgotten vets" from a war that WW2 vets didn't want Americans to consider as worthy as WW2. It was the WW2 vet generation who downplayed the Korea War as a "police action"... not worthy of even being named a "war". Membership or membership status of Post-WW2 veterans in WW2-controlled veteran organizations was all but prevented by WW2 vets. Not so much because of 'war status competition' but more so because WW2 vet Posts and Chapters were open to wives and daughters... two auxiliaries that WW2 vets did not want younger men from Korea or Vietnam competing with them for the female attention of the women their father's generation had opened their meeting places to since being founded after WW1.

Along with the unwelcoming of Post-WW2 veterans from Korea and Vietnam as members of WW2 veteran organizations came also the unwelcoming of African-American WW2 vets. Continuing the policy of WW2-era military racial segregation, these organizations established black-only Posts and Chapters in black areas of their cities, leaving their "white" Posts and Chapters exclusively white-only for as long as fifty years after the end of WW2... with some still remaining white-only to this day as the last WW2 vets pass away.

Opposition to Vietnam War veterans was elevated from Korea on a multi-level offensive. Those who showed greatest animosity for Vietnam War vets were college instructors and staffers, employers, VA workers and non-military social groups. But the group who did its most to prevent Vietnam War veterans from receiving any acknowledgment as war vets were, again, WW2 vets who steadfastly refused to allow their children's generation to share "war vet" status equal to them. And as Korea became known as "the forgotten war" during the Vietnam era, the Vietnam War took on many identities from "police action" to "baby killers".... a phrase first attributed to a Vietnam War vet and failed Presidential candidate named Ron Kovic.

It would not be until President Reagan, a WW2 vet who joined his era in ignoring the nation-healing completion of the Vietnam War Memorial in 1981 by refusing, along with his VP, GHW Bush (also a WW2 vet), to attend the inauguration of 'The Wall', would Vietnam War healing begin. (General William C. Westmoreland was the highest level person in the USG to attend the inauguration).

A year after facing criticism and guilt for boycotting the inauguration of the Vietnam War Memorial, President Reagan delivered a fiery speech at The Wall's first anniversary that all but ended, nationwide, non-vet criticism of the Vietnam War and opposition to those who served in Vietnam. In the space of 24 hours after President Reagan's historical Wall speech, the anti-Vietnam War movement that had lasted for over 10 violent years dissipated like dew on a hot summer day. The most active anti-Vietnam war group was itself comprised of Vietnam Vets. However, after being bought off by President Gerald Ford who ended the Vietnam War, the "Vietnam Veterans Against The War (VVAW)" protest movement transitioned into the "Vietnam Veterans of America" (VVA) vet organization when President Ford craftily offered government jobs to hundreds of VVAW protesters who forcifully canceled many of his campaigns speeches during his re-election effort against Jimmy Carter.

Unfortunately, a new anti-Vietnam vet movement quickly evolved to replace the old that Reagan ended. This new anti-Vietnam vet movement was membered, even more virulently than the now retired anti-war demonstrators, by a segment of Vietnam vets who believed their infantry unit service in Vietnam ranked far superior over the war-theater service of the men and women who served in combat support units in Vietnam. In effect, the old VVAW that protested violently against Richard Nixon and Gerald Ford now protested intensely against Vietnam vets who did not serve as "grunts". The near violent demand by this infantry-service, anti-Vietnam vet movement demanded they be exclusively represented at The Wall by a statue depicting three infantrymen, despite the known reality that the number of names on The Wall of non-infantry men and women greatly outnumbered the names of those who served in infantry units. And for the next 30-plus years the war waged by Vietnam War infantry-unit men against the men they disparagingly labeled "REMF's" continued until the large number of age-related deaths of WW2 vets opened the doors of the veteran's organizations created after WW1 to Vietnam veterans.

Those doors, however, would remain scrupulously guarded by former infantrymen of the Vietnam War who ruthlessly kept organization leadership in their hands, forcing many Vietnam war non-infantrymen to either quit or never join a veteran's organization. And left with either facing closure due to the lost membership dollars that they themselves arrogantly pushed away, thousands of veteran Posts and Chapters were compelled to open their memberships to "associate members"... men and women who did not serve in a war theater or who never served in uniform. Within a few years there were many veteran Posts and Chapters that were exclusively membered by associates only, with not a single veteran, or war veteran, among their membership.

Following the Civil War President Lincoln created the Veterans Administration to be opened to all veterans of his and previous wars. Lincoln's wish did not happen. It would be almost a hundred years to the day, during the Civil Rights movement and during increasing war activity in Vietnam, that many blacks would be allowed to receive veteran's benefits that passed by only one vote in the Senate after WW2, with all but one Southern Senator voting against allowing African American veterans the same benefits as white veterans returning from Europe or the Pacific.

To this day the American veteran community remains largely fragmented, and mostly again by the political voices seeking to establish themselves as the voice of American veterans, even if their voice knowingly seeks to divide veterans and pit vets against each other to prevent veterans from asserting their own voice as WW1 vets did during the 'Bonus March" era in the 1920's. The division remains so great to this day it is often said that "if you get two veterans together in a room you don't have a reunion, you have an argument."

Veterans today only come together and become unified in small groups or over local or petty issues. And "the war bewteen veterans" that began with politicians dividing vets for political gain, later evolving into vets dividing vets for personal gain, has evolved into politicians dividing vets to prevent vets from establishing a unified and forceful block that could lead to more vets serving in Congress and more vets serving in the White House. The victors of the Vietnam war era campaign to suppress the power of veterans has in fact been won by those who opposed the Vietnam War.

Three of America's last four presidents actively (with fraud now being suspected in one case) succeeded in avoiding Vietnam war service. None of America's five living president's saw a single moment of war theater service, with three having refused to serve in military uniform. And, sadly, America's wartime surviving veterans, and those who served in uniform supporting our wars, remain either incapable or unwilling to change future Congressional or White House representation.