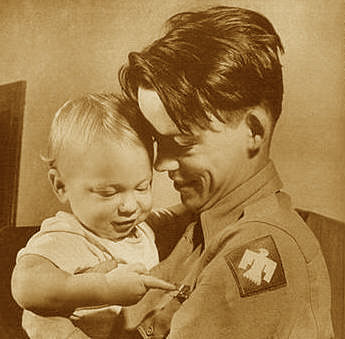 Same recognition regardless of timeline and/or date of one's military service.

Operation Goal: The mission of this Operation is to gain Congressional and Military support and approval to authorize retroactivity of certain medals and badges to eligible living and deceased military veterans who served from our Revolutionary War to the Present... without costing either the taxpayer or our military branches any money.

Today there exists a number of U.S. military awards created since WWII that have never been made applicable, or retroactive, to veterans of prior wars simply because Congress cannot budget the enormous cost of providing retroactive hardware to the millions of former servicemen and women who performed the exact same service for our country over the past 200 years that current military members perform today. Understandably, the administrative cost alone of processing approvals, or rejections, for retroactive awards would burden billions of dollars on the American taxpayer and drain the active military of those billions required to fund our active national defense.

In the proposed Summary Legislation provided below, This Operation proposes that certain awards (see the list) created after World War II, in which their criteria renders them applicable to prior eras, be made automatically retroactive to qualified veterans based on (their) existing military documentation (their DD-214 or Report of Separation).

This Operation also proposes in the proposed sample Legislation that any qualified veteran who wishes to obtain a retroactive award must purchase it him or herself. In other words, neither the taxpayer nor the military budget will be required to fund the cost of providing newly retroactive awards enacted under any approved legislation.

This Operation believes that this simple remedy will fully resolve all issues of deserved retroactivity authorization and funding, while at the same time preserving the enforceability of the Stolen Valor Act of 2007.

Here is a (partial) list of awards created since World War II that are applicable to a limited selection military active personnel and veterans but have not been made retroactive to the Revolutionary War because of the enormous costs involved. (This list will be amended... EMAIL suggested additions to this list:

To establish a medal corresponding to the Combat Action Ribbon, and extend retroactively of this Ribbon back to the Revolutionary War. (Approval/Authorization required.) [Proposed medal design pictured.]
SUMMARY OF TEXT OF PROPOSED CONGRESSIONAL LEGISLATION
(Click her for full text of the Proposed Legislation,
Authored by PO3C Greg W. Colyer.)

a. To extend retroactive authorization, in some cases automatic, to eligible former United States military personnel who performed or served in identical or similar actions now recognized for an existing award (medal, ribbon or badge);

b. To apply the punitive Stolen Valor Act to any misrepresented or misclaimed award that is deemed ineligible by any authorized governing agency;

d. To establish that any medals, ribbons, badges or other "hardware" associated with an automatic or required-approval award be purchased from a "hardware" supplier by the applicant or applicant's representative with no issuance by any military or other federal, state or local agency;

THE ABOVE sections to be revised, amended, added or deleted by Congress.

WHAT YOU CAN DO

1. Prepare a brief cover letter introducing yourself and a summary of the goal of This Operation, then print a copy of the Proposed Legislation.

Mail (do not fax; do not email) your letter and a copy of the Proposed Legislation to your Representative in the House, and/or to one or both of your Senators. (We have not supplied a sample cover letter because your letter should be written by you, using your own words.)

You can find your House Representative and Senator's mailing addresses here:

2. If you are a webmaster, download retroweb.zip. This webpage and all of its images are all enclosed in the "retroweb.zip" package. Unzip retroweb.zip and place retroweb.zip, along with its contents, on your webspace so that the veterans in your organization and visitors can read about the Operation on your website.

This is a downloadable proposed sample form in pdf format. This sample is not useable at this time. This sample is being provided solely to let you know what the official request form would look like. Do not attempt to use this Sample Form now. We will advise you when this Sample Form is officially activated for use, and at such time a copy of this form will be sent by you to the National Records and Personnel Center (along with photocopies of any/all relevent supporting documentants). A second copy (along with documents) is to be sent to Operation RetroActive Recognition (see addresses below). Save a third copy to retain for your personal record.

Please Note the Conditional Acknowledgment of your Authorization Request that is stated on Form SF180-R:

"DEAR STAFF, I am requesting retroactive authorization for the following award(s) that is/are non-automatic and requires approval. I am including documentation I believe authorizes this/these award(s). I am including the required ($--.--) application fee for each award listed below. I understand the fee(s) is/are non-refundable whether this application is approved or denied. I also understand that if this application is approved I must purchase any hardware associated with this award and may not request free issue from either the military or any federal agency."

Click Here or on the image to the left to Join Operation Retroactive Recognition info-exchange Forum
You can communicate in real time with every member of The Forum via email, as well as receive new info on the progess of the Legislation and other military medal news. Membership is free to all.