Contact The American War Library | Gallantry Cross References
The information on this website is in the public domain. No permission is required to quote, use, distribute or republish.

Common Myths About The Vietnam Cross of Gallantry
(This Information Site is Continually Updated. )
Click here for the official Gallantry Cross Issue Regulations

Not true. The VCOG with Palm Device award consists of four variations: 1) the full-size medal. 2) a miniature version of the full-size medal. 3) the unit (gold-color framed) ribbon (or "colorbar"). And 4) the individual frameless ribbon (colorbar). All four variations are authorized to ALL military persons of any Nation who served under Military Assistance Command, Vietnam.

Additional Note for American recipients: The United States in the only nation that does not produce a full-size medal associated with its (ribbon-only) unit awards. This fact confuses some American Vietnam vets who mistakenly believe or advocate that Americans can only wear/possess/display the VCOG unit ribbon. However, rather than continue to mistakenly believe or erroneously advocate that the VCOG is restricted to the framed unit ribbon, American veterans should lobby their Congress to create/institute full-size medals associated with American unit awards so that the United States military medal array catches up to the rest of the world.

Not true. No government issues medals of another government. To obtain the VCOG you must purchase it. If you demand obtaining the VCOG for free, do the following:

Not true. Australians sometimes confuse USARV with MACV. Australians did not serve under USARV (United States Army, Vietnam) which was created by the United States to govern US Army personnel which many Australian units operated alongside. But Australia, and ALL nations with military units operating in Vietnam, were subordinate to MACV (Military Assistance Command, Vietnam) which was created by the United Nations. MACV was the highest level military government in Vietnam. It was under MACV and not USARV that the Vietnamese Congress issued its VCOG (and other medals) awarding authorization.

Not true. Like the National Defense Medal, the Appreciation of Service Certificate and the Cold War Medal, the VCOG is an 'automatic' award that is fully authorized to ALL veterans who served in Vietnam. If the VCOG is not listed on your DD-214 (because you discharged prior to 1974 or the clerk who typed your DD-214 after 1974 was an airhead) it is not necessary to request a DD-215 as long as your DD-214 displays Vietnam Service. You are 'automatically' fully authorized.

Not true. The Vietnamese Congress made no such distinction between individual or collective award. All VCOG authorizations are equal.

Not true. The official Government of South Vietnam ceased to exist in May, 1975. The former president and vice president of Vietnam voluntarily relinquished their official authority to enact/declare/institute any post-government mandates, and neither expressed any desire to do so. Both gentlemen have repeatedly stated that all actions mandated by their former government are "written in stone, for all time. "

Only partly true. This 'group' is composed of self-appointed, disgruntled, self-exiled nuts who are represented by an American Vietnam Veteran who imagines himself to be a reincarnated version of General Douglas MacArthur. This delusional American veteran and his 'group' of Vietnamese exiles have no official standing. They are not recognized by the U. S. State Department. They have no official authority whatsoever, and no authority to modify any act, decision or edict established by the legitimate Government of Vietnam, now deceased (as of 1975). The VCOG with Palm Leaf device remains the officially authorized award to military personnel of all Nations who served in Vietnam between 1954 and 1975. There has been and will be no "upgrade" of the Palm Leaf device to any other device. Each of the four devices are equal.

Not true. There is only one official VCOG. There are no official "commemoratives" of the VCOG. These VCOG commemoratives legally being sold by commercial medal retailers and made to look similar but not identical to the official VCOG (identical ribbon coloring, etc) are nothing more than "Cracker Jack" box toys intended for purchase by Vietnam War wannabes who can now be punished by law (The Stolen Valor Act of 2007) for illegally possessing or claiming recipientship of the official VCOG. Vietnam vets who served in Vietnam can possess the official medal and have no need, and should have no desire, to possess a toy VCOG "commemorative".

Additional Note to Veterans: All official Vietnamese awards may be worn on the discharged veterans uniform for Honor Guard of other purposes. Active Duty (AD) personnel who served in Vietnam are restricted to wearing only those Vietnamese awards specifically authorized by the Dept of Defense for wear on the AD uniform. To find out which Vietnamese medals may be worn on the ACTIVE DUTY uniform, CLICK HERE. Again, the Vietnamese awards listed on the above referenced link MAY BE WORN by Honor Guard and military holiday/celebration personnel. (See the official Order of Military Precedence for proper wear/display/alignment order. 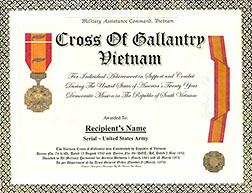 A VCOG Display Recognition is authorized and many were issued during the war, however, the military has never been obligated/required by Congress to issue a display certificate for any award, with one exception, the Medal of Honor. Certificates issued to active duty personnel occur only when the local command possesses certificates to issue. (Prior to 1995 the government was not required to issue even full-sized medals. ) The VA is not authorized to issue/provide certificates and, in fact, is prohibited from doing so for budgetary and other reasons. Please do not request your local VA Service Officer to provide you a medal or certificate for any foreign award you are authorized. FYI: The only military display certificate required by Congress for mandatory issue is Medal of Honor. (For info on the VCOG display recognitions, see this page: http://www.amervets.com/replacement)

True. These lists are either maintained by agencies directly responsible for providing certain, related services or provided to various veteran information agencies such as The War Library for general research. With regard to the VCOG list, a listing of all Vietnam Service personnel (who are also authorized the VCOG, as well as other Vietnamese awards) is online. CLICK HERE for database access information.

Not true. Like the U. S. Silver Star medal that, in itself, defines personal Gallantry, Heroism and Valor, the VCOG award does not have a "V" device because the medal itself represents personal Valor.

Not true. Lost VCOG medals remain the permanent property of the host government which now serves as the legal custodian of the VCOG as mandated by the Vietnam Congress in its final session. The Vietnamese Congress ordered that all recipients of all Nations who provided military assistance and personnel to the war effort please defer to the official acknowledgment assigned to MACV. Found VCOGs should be mailed along with a letter identifying the finder and the location where the item was found to the following address:

The Secretary of Defense
Room 3E880
The Pentagon
Washington DC 20301

The United States Secretary of Defense will assign the lost VCOG to the proper government authority (of the recipient's Nation) for proper delivery to the authorized next of kin.

Not true. Found items should be mailed with a report to the address above.

No, it would be improper to do so. Military medals hold an exalted place in all Allied nation societies. The military recipient of that medal gave part of him or herself. A good citizen should feel patriotic in restoring a lost item to a recipient. Whenever you see a pre-owned military medal being sold you should ask the seller to please return the medal to the Secretary of Defense at the address listed above.

Additional topics will be added as they are received.

SURVIVING REFERENCE TO THE VIETNAMESE EDICT:

Department of the Army
Pamphlet 672-3

The above dates in the DAGO apply only to the wear of Vietnamese medals on the ACTIVE DUTY military uniform. The dates do not apply, under Vietnamese regulation, to all Allied military personnel who were authorized the Vietnam Service Medal prior to 1965 and after 1973. Individual recipient nations may restrict wear of foreign medals on their Active Duty uniforms.