Contact The American War Library
Ruptured Duck (Honorable Discharge) References
The information on this website is in the public domain. No permission is required to quote, use, distribute or republish. 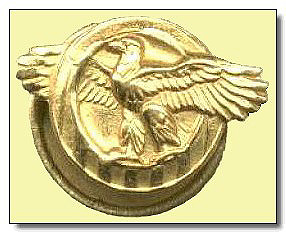 Not true. Actually, the plan for a multi-service branch, universal Honorable Discharge Lapel patch originated in 1919 at the close of WWI. The purpose of the patch, and later pin, was to permit Honorably Discharged military personnel to wear their uniform for a period of time after they left military service due to their inability to afford civilian clothes, while at the same time identify themselves as no longer active duty personnel. The pin version of the patch was intended to permit civilian dressed, Honorable Discharged personnel to identify their former military status easily when applying for work or veteran's benefits. The patch and pin were also intended to replace and supersede all previous Honorable Discharge devices. Neither the patch nor pin were put into production until years later.

Not true. The Ruptured Duck is a permanent 'hardware' device with no expiration date. It has replaced all previously issued Honorable Discharge lapel pins.

Not true. The Ruptured Duck is the only official all-branch "Honorable Discharge" lapel pin. The current Army, Coast Guard and Navy pins sometimes issued to Retirees are "Honorable Service" pins that are authorized principally to age and medical retirees. The military definitions of "Discharge" and "Service" are not to be confused as meaning the same.

True. The original design conceived in 1919 bore the flat image of an eagle as depicted in the Presidential Seal. The image was changed in May, 1943 after the Washington Conference (code named The Trident Conference) between Roosevelt and Churchill to depict an eagle appearing to initiate flight (The Eagle Has Flown). This image was intended to coincide with the timing of the first major Allied Offensives against the Axis Powers in the Pacific and Atlantic.

Not true. This myth was intentionally created by Louis B. Mayer of Hollywood fame. Mr. Mayer spent hundreds of thousands of dollars spreading this myth to save the movie career of one of his most 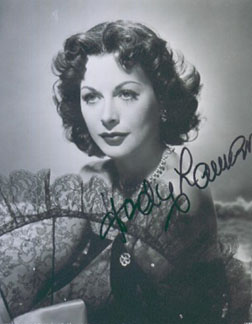 famous actresses, Hedy Lamarr, who had recently escaped from Nazi Germany. Ms. Lamarr had been married to Friedrich Mandl who owned a network of arms factories controlled by the Krupp Family. Ms. Lamarr gained infamy in Germany not because of her nude acting, which her husband opposed, but because it was confirmed that it was she and not her husband who came up with revolutionary ideas to improve weapons design and production in the Mandl section of the Krupp Arms works. It is believed that her husband conspired to kill his wife after having been humiliatingly confronted by others in his elite circle of Nazi megalomaniacs that his wife was fully known by all to be the originator and owner of his military enhancements. But learning about his murder plans Ms. Lamarr, along with her maid who were both inspired by their mutually adored Jewish heroine, Judith, drugged her husband and fled Germany. Upon eventually arriving in the US from her long escape route from Europe with the aid of a Jewish "Underground Railroad" stretching from Germany to the US, Ms. Lamarr was quoted as saying that her terrible and hazardous flight originated -- in the actresses words -- on a 'broken bird'... ("segeltuch gebrochen"). In English, the German "segeltuch gebrochen" spoken by Ms. Hedy Lamarr translates to "Ruptured Duck". The term was picked up immediately by the movie-star crazed female employees of the manufacturing plant that produced the "Duck" and labeled their shipping boxes "Ruptured Ducks", partly in commemoration of Ms. Lamarr's heroic flight, but mostly because it was common practice -- if not required policy -- during WW2 to label shipments destined for the war theater differently than their true contents so as to not inform enemy agents about the actual contents. The term "Ruptured Duck" had forever caught on as the Honorable Discharge Lapel pin's nickname... thanks to Hedy Lamarr.

However, in 1944 Army Chief of Staff George C. Marshall issued classified Special Order #131 directing that all historical information contained in any medium, "... paper, microfilm, acetate, film, etc..." on the Honorable Discharge Lapel Pin, "...commonly referred to as 'The Ruptured Duck'... currently residing in any command will be immediately destroyed. General Marshall's order was intended to prevent "...possible serious and severe reduction in troop morale"... should the continued use of what he considered a ...disparaging term...", "Ruptured", be applied to the Honorable Discharge lapel pin. 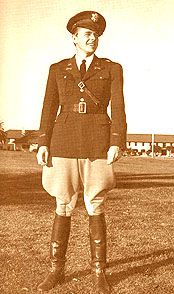 Within a month virtually every military document providing the history of the Ruptured Duck virtually disappeared. Within a year the common statement as to the origin of the Ruptured Duck was replied with "nobody knows". Special thanks to President Ronald Wilson Reagan (a former President of the Screen Actor's Guild) for providing The American War Library with a copy of General Marshall's G.O. 131 in 1985.

It would be another fifty-one years (during the massive declassification of wartime records ordered by President Bill Clinton for POW research) before declassified reports revealed the reason for General Marshall's well-founded reason for killing off the history of the Ruptured Duck since he realized it was impossible to eradicate its name, for fear that "...possible serious and severe reduction in troop morale"... could result if it were disclosed that the top Secret code name of one the highest United States military officers was "Duckpin". The codename "Duckpin" was assigned to the four star, soon five star, general whose singular being required the highest level of confidence of all those he commanded. The General codenamed "Duckpin" (in 1942) was Dwight David Eisenhower.

Not true. An recipient is eligible for only one Ruptured Duck regardless of the number of times he received an Honorable Discharge upon re-enlistment.

Not true. The Duck was distributed free prior to 31 December 1946 for two reasons: One, it identified to potential employers that the job applicant dressed in civilian clothing had served in the military and served Honorably. (Job assistance programs offered by the military after 1946 ended the need for veterans to possess a visible military-issued identifier.) Two, prior to 31 December 1946 veterans who did not own any civilian clothing were permitted to wear their uniforms for 60 days after discharge. The Duck pin identified those vets who received Honorable Discharges.

Additional myth corrections will be added as they are received.